Auto Express readers elected the new Citroën 2CV as the 2014 Most Wanted Car !

The official Citroën 2CV revival is the Citroën Revolte (back to 2009) which had a DS logo.

The Citroën Revolte is a hybrid compact city concept car that was presented by Citroën at the 2009 Frankfurt Motor Show.

Auto Express is a weekly motoring magazine sold in the United Kingdom.

"The Citroen 2CV is a motoring icon but our readers would love to see an update on the 1940s classic design.

Here’s how it could look...Citroen’s classic “deux chevaux” is one of the most recognisable car designs in history but Auto Express readers think it could do with a refresh for the modern age. A new Citroen 2CV was one of the Most Wanted Cars when we asked users which fantasy car they’d most like to see built. We’ll be asking you to pick your favourite soon.

Few cars have enjoyed the longevity of the original 2CV, which remained in production for 42 years and spanned six decades. Despite being one of the oldest cars on our Most Wanted Cars top 10 list, it also seems to have come closer to a return than almost any other model under consideration." Manufactured in France between 1948 and 1989 (and its final two years in Portugal 1989-1990), over 3.8 million 2CVs were produced, along with over 1.2 million small 2CV-based delivery vans known as Fourgonnettes. Citroën ultimately offered a number of mechanically identical variants including the Ami: (over 1.8 million) the Dyane (over 1.4 million); the Acadiane (over 250,000); and the Mehari (over 140,000). In total, Citroën manufactured over 8.7 million 2CV variants.

Citroën 2CV Charleston commercial - It is written on the beach : "Free love"

The Citroën 2CV got a strong reputation as funny car thanks to Louis de Funès's movies. 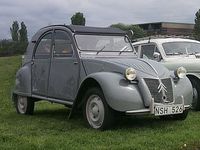