The popularity and excitement inherent in rallycross has seen the discipline grow tremendously in recent years and now the process has been given a further lift by the creation of the FIA World Rallycross Championship from 2014. In response to this, Peugeot has joined forces with one of the sport’s leading teams, Hansen Motorsport.

Peugeot goes with rallycross success – having clinched eight French drivers’ championship crowns between 1988 and 2012 and boasting a similar record across the various different divisions in Europe over the same period – Peugeot is a natural fit for motorsport’s newest and most exciting World Championship.

After Ford pledged its official backing to OlsbergsMSE’s World RX effort in 2014, fellow big-hitter Peugeot has joined forces with another of rallycross’ leading outfits, Hansen Motorsport, as it prepares to enter the fray for the championship’s debut campaign this year. Team Peugeot-Hansen will compete in the Supercar class in all 12 rounds on the calendar – beginning at Montalegre in Portugal in May – with a T16 silhouette version of its 208 model. 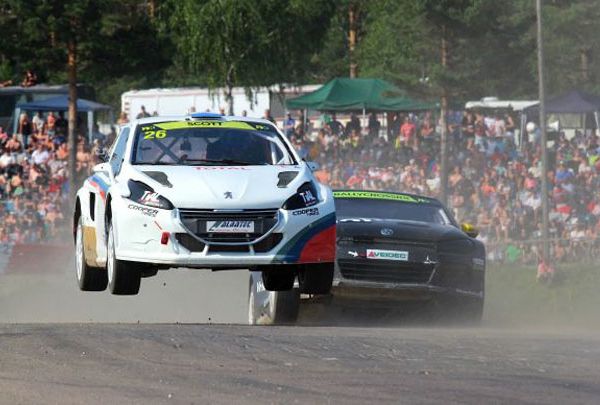 “We are delighted that Peugeot Sport has joined Ford Racing in committing to officially supporting professional race teams entering the FIA World Rallycross Championship in its inaugural year,” he said. “To have a second major manufacturer involved in this way is another significant coup for our fast-growing series.

“With the knowledge, experience and expertise of Hansen Motorsport behind the project, the team looks set to be a front-running contender in what is sure to be a thrilling and fiercely-disputed season of rallycross competition.”

Peugeot Sport Director, Bruno Famin explained that rallycross’ burgeoning popularity amongst a whole new generation of fans – allied to the rapidly-growing discipline’s exhilarating and affordable entertainment in vital markets – made World RX a perfect match for the brand’s international ambitions.

“At Peugeot Sport, we are constantly looking to explore different forms of motorsport,” he said. “Rallycross is a discipline that is expanding quickly, and that includes the introduction of an FIA-sanctioned World Championship from this year. We were attracted to the sport by a long list of factors, including its spectacular side, the big crowds it draws and the cars that are involved. They are very close to our target.

“We naturally sought to strike up a relationship with one of the best teams in the business, namely Hansen Motorsport. Team Peugeot-Hansen is starting from scratch for this new championship, and we face a fascinating challenge with a calendar of 12 rounds across the world in some of the most strategically important markets for the brand.”

Hansen Motorsport Team Manager Kenneth Hansen is the most successful driver in rallycross history, with no fewer than 14 FIA European Championship titles to his name, six silver medals in the series and ten Swedish crowns. The ultra-experienced Swede is hoping his squad can continue adding to its impressive trophy collection in World RX – a championship whose entry list is looking more competitive by the day.

“We are very proud and honoured to be working with Peugeot Sport in this year’s FIA World Rallycross Championship,” Hansen said. “We couldn’t be more motivated, but we are also acutely aware that the programme comes with a huge responsibility. Be sure, though, that we will do everything in our power to make sure Peugeot has no regrets about placing its faith in Hansen Motorsport.

“My entire focus is now on getting on with the work that awaits us, from the team’s branding to the tiniest of screws which will go into the car. Hansen Motorsport can look back at a successful record, and our big dream right now is to fight at the very front with Peugeot. This is a completely new project which starts here and now, so we will need to work harder than ever in our bid to secure more success in 2014.”