Carscoops spied a Citroën test mule which could be the next generation of Jumpy. The spirit could be inspired by the Tubik concept van unveiled at the 2011 Frankfurt Motor Show, however the face style looks like taken from the new C-line identity.

As we can see, the headlights and the leds are switched compared to the C4 Picasso. The Citroen Tubik concept van is called Tubik in reference to the style of Citroën TUB and Type H, it is a futuristic minivan 4.80 m long and 2.08 m wide powered by the HYbrid4 technology (diesel hybrid engine). It can accommodate nine people in a very flexible interior where the center seat can turn into bed or worktop while the two front passenger seats tilt to meet rear passengers.

The Citroën TUB was a light van derived from the Traction Avant passenger car. The van was produced by Citroën between 1939 and 1941. In May 1941 an upgraded version, the Citroën TUC replaced the TUB, but by the end of that year the last of these vans had probably been produced. The TUB is the first commercial vehicle ever equipped with a lateral sliding door.

The Citroën H Van, Type H, H-Type or HY is a light truck produced by Citroën between 1947 and 1981. It was developed as a simple front wheel driven van after World War II. A total of 473,289 were produced in 34 years in factories in France and Belgium. Most of them were sold in France, Belgium and the Netherlands. They were not sold in the UK in right hand drive. 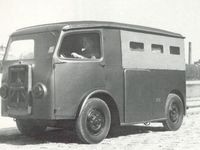