Exclusively, the limited-edition Helly Hansen version of Captur can be ordered in Flamme Red, and generous use of the colour has been made inside the cabin, too. The rugged appeal of this version of Renault’s urban crossover is reinforced by the fitment of front and rear skid plates and 17-inch wheels.

Leather upholstery is also available exclusively for this limited-edition version (standard or optional depending on market).

Any of the engines available in the Captur catalogue can be specified for the limited-edition Helly Hansen version which is due to go on sale in June in most European markets, followed by a september release date for France, the Netherlands, Belgium and Spain.

The range of the brand’s first urban crossover, Renault Captur, has been expanded by the introduction of a new limited-edition Helly Hansen version developed in association with the celebrated Norwegian outdoor sport and leisure clothing brand founded in 1877. The new addition features a distinctive adventurer look thanks to its exclusive Flamme Red finish, making it the only version of the model to offer this body colour, as well as to its Platine Grey front and rear skid plates and 17-inch black diamond-effect alloy wheels. HH badging on the wings portray indicates the car’s association with Helly Hansen. This advanced technology is an evolution of the traction control system designed to optimise grip in difficult conditions, such as snow, mud, sand, etc.

A rotary control on the centre console allows the driver to select the ideal mode for the conditions. There are three modes (‘Road’, ‘Loose Ground’ and ‘Expert’), the first of which is the default choice for hard surfaces (dry, wet or ice).

The limited-edition Helly Hansen version can be specified with any one of the engines currently available for Renault Captur: Energy TCe90, TCe120 with EDC automatic transmission, or Energy dCi90 with manual gearbox or automatic EDC transmission.

The limited-edition Captur Helly Hansen will go on sale across most of Europe in June, followed by its release in France, the Netherlands, Belgium and Spain in September. Prices will be published soon by the individual markets concerned. 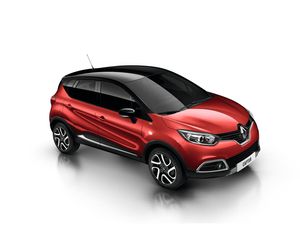 Founded in Norway, in 1877, Helly Hansen continues to protect and enable professionals making their living on oceans and mountains around the world. Their apparel, developed through a blend of Scandinavian design and insights drawn from living in some of the harshest environments on earth, helps provide the confidence professionals need to step out into the elements and complete their jobs.

The company invented the first supple, waterproof fabrics more than 130 years ago, created the first fleece fabrics in the 1960s and introduced the first technical baselayers made with Lifa® Stay Dry Technology in the 1970s. Today, Helly Hansen is the official uniform partner for more than 60 ski resorts and mountain guiding operations and has outfitted more than 33,000 mountain professionals. The brand's outerwear, baselayers, sportswear and footwear for winter, outdoor and water sports are sold in more than 40 countries. To learn more about Helly Hansen's latest collections, visit www.hellyhansen.com.